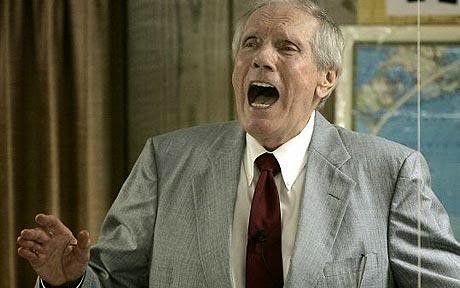 Fred Phelps, the 84 year-old patriarch of Westboro Baptist Church, is reportedly near death. His estranged son, Nathan Phelps, writes on his Facebook page:

I’ve learned that my father, Fred Phelps, Sr., pastor of the “God Hates Fags” Westboro Baptist Church, was ex-communicated from the “church” back in August of 2013. He is now on the edge of death at Midland Hospice house in Topeka, Kansas. I’m not sure how I feel about this. Terribly ironic that his devotion to his god ends this way. Destroyed by the monster he made. I feel sad for all the hurt he’s caused so many. I feel sad for those who will lose the grandfather and father they loved. And I’m bitterly angry that my family is blocking the family members who left from seeing him, and saying their good-byes.

Hemant Mehta has more at the Friendly Atheist:

I just got off the phone with Nate and he confirmed what he had written. The rumors had been flying for several weeks, he said, but after a conversation with some of his fellow “excommunicated” family members, he found out that the rumors were true. He elaborated on that final line, too, saying that the Phelps family is now blocking anyone who is no longer with the church from seeing him, including Fred’s sons, daughters, nieces, and nephews. Why was he kicked out of his own church? Did he have a change of heart near the end of his life? There’s no definitive answer to that and Nate has heard different things (so any explanation is pure speculation right now).

Over on Twitter, some are calling for a picket of Phelps’ funeral, but Mehta and others suggest that the better response might be to ignore it completely. Rod Dreher writes at American Conservative:

Can you imagine having come to the end of your life, very nearly to the moment in which you will meet your God and be reckoned with, and all you have to show for it is … that? I’ve always thought the Westboro Baptist Church people were despicable, but there is something about the thought of that old man lying on his death bed, forsaken, the victim of his own sins, that makes me pity him. One tear of repentance from the vicious old preacher will open the floodgates of the divine mercy he spent his life trying to deny to others. I pray for that tear. And I hope no one pickets his funeral, giving to his family the mercy they do not deserve.