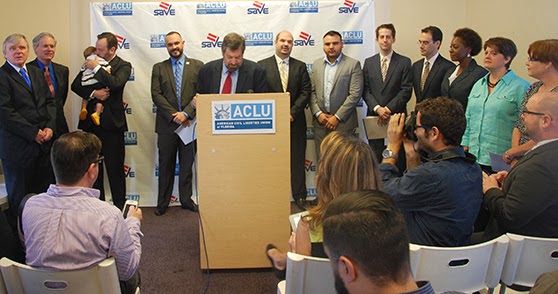 The American Civil Liberties Union and the ACLU of Florida have filed a lawsuit in federal court on behalf of eight same-sex couples and SAVE, an LGBT rights organization based in South Florida, challenging the state’s refusal to recognize the couples’ marriages, which were performed in other states and recognized by the federal government. One of the couples — Sloan Grimsley, a firefighter from Palm Beach Gardens, and her wife Joyce Albu, a consultant assisting parents of children living with developmental disorders — are seeking protections for their children, the youngest of whom is two years old. Sloan and Joyce have been together for 9 years and were married in August 2011 in New York. The couple is concerned that if something were to happen to Sloan in the line of duty, Joyce would not receive the support the state offers to spouses of first responders who make the ultimate sacrifice, and thus would struggle to provide for their family’s needs.


RELATED: In January, Equality Florida and the National Center for Lesbian Rights filed a marriage equality suit on behalf of six local couples. Last month the Orlando-based Liberty Counsel, who authored Florida’s constitutional ban on same-sex marriage, filed a motion to intervene in the case.