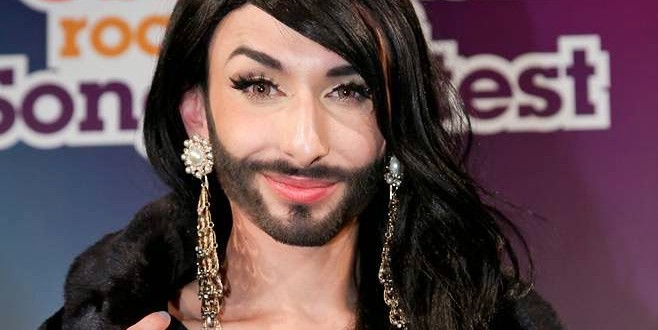 Now this is the kind of Eurovision entry that made me fall in love with the contest many years ago. Austrian drag queen Conchita Wurst (real name Tom Neuwirth) is a longtime performer on local reality shows. In 2007 he was part of the short-lived boy band Jetzt Anders with other cast members of the singing competition show Starmania. That year Jetzt Anders scored a couple of local chart hits with Neuwirth performing lead vocals. Enter Conchita Wurst in 2011, when Neuwirth’s bearded drag persona appeared in the reality shows The Hardest Jobs In Austria and Wild Girls, the latter of which was a Survivor-style show set in the Namibian desert.

In 2012, Conchita Wurst took second place in Austria’s Eurovision contest. When Wurst was named this year’s entry for Austria, a petition campaign was launched in Belarus which demands that state television edit her out of the broadcast of the finals in Copenhagen. According to the petition, Wurst’s appearance in the telecast “will turn Eurovision into a hotbed of sodomy.” (Hooray!) A similar petition has been launched in Russia, where a group calling itself the All-Russia Parents Meeting is demanding that Russia not broadcast the competition at all. Wurst has vowed to denounce Vladimir Putin during the event.

Austria won’t name the song that Conchita Wurst will compete with until Tuesday, but JMG reader Rich has prodded me to jump the gun by a few days. The first clip below is the track that won her second place in Austria’s 2012 contest. In the second clip, Wurst covers Celine Dion in the 2011 singing contest, The Big Chance. As you’ll see, her entrance was met with snickering, but the audience was on their feet cheering by the finish. If you haven’t gotten the joke by now, wurst is the German word for “sausage.”


RELATED: Wurst’s beard is a topic of discussion on a men’s facial hair forum, where contributors are arguing over its realness. There are many photos of Wurst in and out of drag there and one commenter claims she is styling herself after Kim Kardashian.

Previous Sen. Rand Paul: The GOP Needs To Back Off On Same-Sex Marriage
Next Franklin Graham Endorses Putin