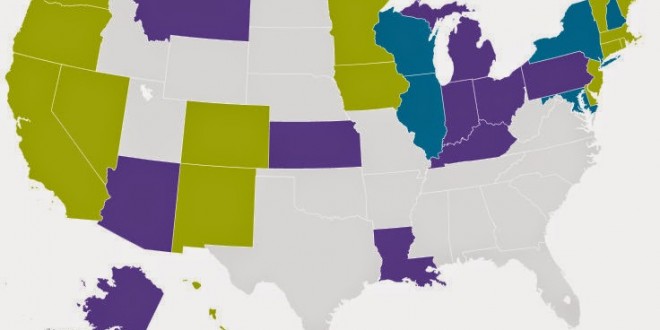 All government employees are protected by the U.S. Constitution against irrational discrimination based on sexual orientation or gender identity. In addition, some measure of protection already exists under Title VII based on gender, which has been held to include gender identity and expression. The U.s. Equal Employment Opportunity Commission (EEOC) and several courts have interpreted Title VII to protect transgender employees, and the EEOC has interpreted Title VII to cover sexual orientation discrimination. The Supreme Court has held that the EEOC’s interpretation of Title VII are entitled to “great deference.”

Notice that New York shamefully continues to lack statewide gender identity protections, despite such a bill passing in the state Assembly six times. Maryland will join the 17 states with full LGBT employment protections when Gov. Martin O’Malley signs the transgender rights bill approved by the state legislature last week. There’s only one way to turn the entire map green: ENDA.