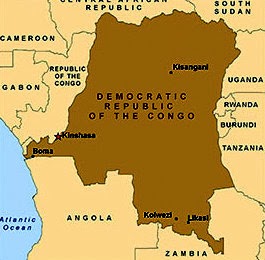 Anti-gay politicians are pushing the Democratic Republic of the Congo to follow Uganda’s lead on criminalizing homosexuality. Via Think Africa Press:

Last December, Steve Mbikayi, an MP with the Parti Travailliste Congolais (PTC), introduced a draft bill to the Congolese National Assembly that would explicitly criminalise homosexuality. The DRC is one of the relatively few African countries in which homosexual acts have not been directly banned though there is much discrimination against LGBT communities. Throughout February, Mbikayi toured the country to garner popular support for the bill. In addition to radio interviews and television appearances, the MP spoke at a conference organised at the University of Kinshasa where he condemned homosexuality and Western leaders for condoning “unnatural acts” such as paedophilia and bestiality. Mbikayi also defended his bill as being constitutional, citing article 40 of the Congolese constitution, which states that “all individuals have the right to marry a person of their choice of the opposite sex.” Mbikayi’s bill – which has yet to be made public but which has been seen by Think Africa Press – contains 37 articles that would render homosexuality and transgenderism illegal.

The bill contains a bizarre clause which declares that the government will pay 75% of the cost to “correct hormonal disorders that may result in homosexuality.”

Previous Chelsea Handler Vs Piers Morgan
Next Bill O’Reilly: Abraham Lincoln Would Never Have Appeared On Funny Or Die