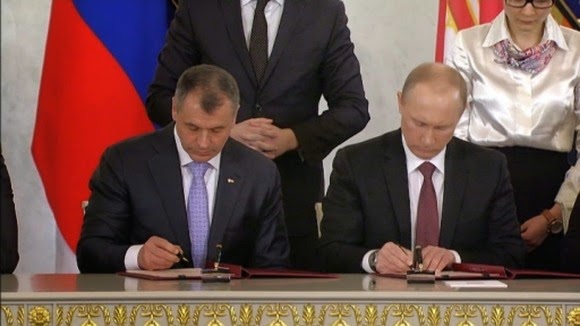 Russian President Vladimir Putin, defying Ukrainian protests and Western sanctions, on Tuesday signed a treaty making Crimea part Russia but said he did not plan to seize any other regions of Ukraine. In a fiercely patriotic address to a joint session of the Russian parliament in the Kremlin, punctuated by standing ovations, cheering and tears, Putin lambasted the West for what he called hypocrisy. Western nations had endorsed Kosovo’s independence from Serbia but now denied Crimeans the same right, he said. “You cannot call the same thing black today and white tomorrow,” he declared to stormy applause, saying Western partners had “crossed the line” over Ukraine and behaved “irresponsibly”. He said Ukraine’s new leaders, in power since the overthrow of pro-Moscow president Viktor Yanukovich last month, included “neo-Nazis, Russophobes and anti-Semites”.

Crimea is about the size of Massachusetts.

Previous Freep This Ranker Poll
Next Ben Shapiro Has The St. Patrick’s Sadz