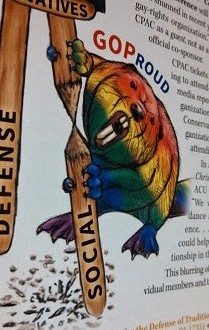 The red-caped Catholic loons of Tradition, Family, & Property are handing out a flyer at CPAC that depicts GOProud as a rainbow-hued beaver gnawing at one of the supporting legs of conservatism. Or something. Via Peter Montgomery at Right Wing Watch:

After two years of being banned, this year GOProud was able to buy regular tickets to attend, but they were not allowed to speak on any panels or have a booth.