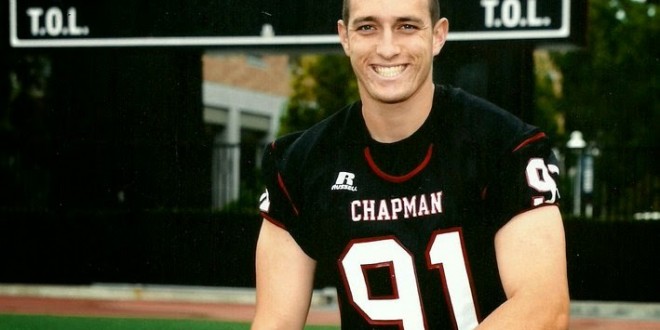 Outsports reports that NCAA defensive end Mitch Eby came out to his Chapman University teammates earlier this month. Eby first told his two roommates, both also players, then opened up to his head coach, who agreed to allow Eby to address the full team. An excerpt from his speech:

“I came up here today to talk to you guys about something that I’ve been dealing with for quite a while. It’s something personal that I’ve always thought I could just bury away, but I can’t. We live life so worried about how other people view us that we forget about ourselves. I can no longer go on living in fear, repressing myself because of how society may view me. I can no longer lie to my friends, family and teammates. It’s time I lived life for myself for a change. With that being said, I am ready to share with you all that I am gay. It has taken me years to accept myself for who I truly am, so it’s irrational to expect everybody to unconditionally accept me right away. However, the one thing that I hope that I can count on from each of you, my teammates, is your respect. Your respect as a friend, your respect as a teammate, and your respect as a man.”

“Mitch is demonstrating great courage and leadership by publicly coming out as gay while still actively playing college football. While the decision to take this step is a deeply personal one, it impacts countless other young closeted athletes who will wrestle with how to compete and live their lives authentically. Today represents another important step in making sports a welcoming environment for all.”

Previous Hobby Lobby Founders Meet Pope Francis
Next Robertson: Jews Are Too Busy Polishing Diamonds To Work On Their Cars