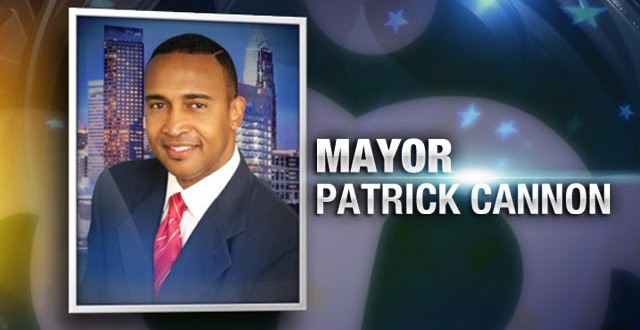 Democratic Charlotte Mayor Patrick Cannon, who took office less than four months ago, was arrested today by the FBI on charges of theft and bribery.

The arrest follows an undercover investigation that began in August 2010. Authorities allege Cannon solicited and accepted cash from undercover FBI agents posing as real estate developers and investors who wanted to do business in Charlotte, North Carolina’s largest city. Cannon allegedly accepted bribes in exchange for the privileges of his position as an elected official, whether it be as mayor, mayor pro tem or a city council member. The FBI said he accepted money from agents on five separate occasions. The last was on Feb. 21, 2014. He is accused of accepting $20,000 in cash at the mayor’s office. The exchanges began in January 2013, according to the Department of Justice. In total, Cannon accepted about $48,000 in cash, airline tickets, a hotel room and use of a luxury apartment, the FBI said.

Cannon was first elected to the Charlotte City Council in 1993 at the age of 26, becoming the youngest Council member in city history. During last year’s mayoral campaign, one of Cannon’s Democratic opponents gained local headlines when he called Cannon, “that black gay guy.” Cannon responded with a statement that denounced his opponent for “using inflammatory language to attack a family man” such as himself.

In a later campaign interview with local LGBT outlet Q Notes, reporter Matt Comer asked Cannon if he supported marriage equality. Cannon responded, “I would say my belief has always been to each his or her own, relative to what they want to practice. However, my personal belief is that I don’t subscribe to it. I am not here to be anybody’s judge relative to what they feel they want to explore and/or engage in, but it’s something that personally I don’t subscribe to.” Cannon then declared that he had voted against North Carolina’s ban on same-sex marriage as part of his “to each his own” belief.

In November 2013 Cannon succeeded former Charlotte mayor and rising Democratic star Anthony Foxx, who was named Transportation Secretary by President Obama.  If convicted, Cannon faces up to 20 years in prison. He was freed on bail today following his arrest.