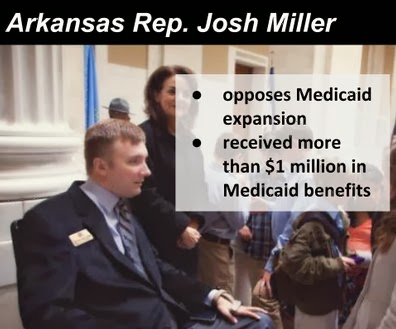 Asshole Of The Day

JMG reader Will points us to the website Asshole Of The Day, which quotes Talking Points Memo about GOP Arkansas state Rep. Josh Miller:

More than a decade ago, Arkansas Rep. Josh Miller (R) was in a catastrophic car accident that broke his neck and left him paralyzed. Medicare and Medicaid paid the $1 million bill for his hospitalization and rehabilitation. But this week, as the Arkansas legislature has debated continuing its privatized Medicaid expansion under Obamacare, Miller has remained steadfast in his opposition. The Arkansas Times highlighted the contrast in a Thursday report. The alternative newspaper reported that Miller receives ongoing coverage through the government programs, including Medicaid-covered personal care assistance. The Times asked Miller, 33, about this apparent contradiction: Shouldn’t someone who has experienced the benefits of health insurance, including insurance paid for by the government, understand the importance of expanding those benefits to others? The difference, he said, is that some of the 100,000 people who have gained coverage through Arkansas’s Medicaid expansion don’t work hard enough or just want access to the program so they can purchase and abuse prescription drugs. “My problem is two things,” Miller said. “One, we are giving it to able-bodied folks who can work … and two, how do we pay for it?”

Miller’s Wikipedia entry notes that he was so drunk at the time of his accident, neither he nor the other person in the car can recall who was driving. Miller was, perhaps obviously, uninsured.