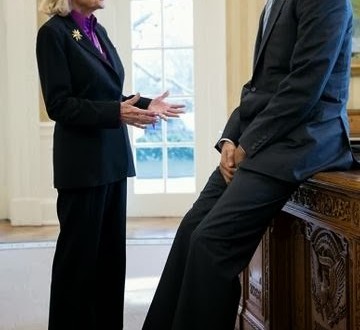 A message of thanks to DOMA champion Edith Windsor was posted today on the White House blog. The statement is attributed to White House Senior Advisor Valerie Jarrett. An excerpt:

When the Court handed down its decision last June, President Obama called Edie from Air Force One to congratulate her on her victory. And earlier this week, the President invited Edie to the France State Dinner and the Oval Office to thank her in person. The thanks expressed by the President that day have been echoed by millions of Americans, including thousands of legally married couples who can now live their lives with greater justice and dignity – thanks to heroes like Edie Windsor who have been willing to stand up and fight for equality under the law.

Quite the lovely Valentine’s Day timing. The photo is dated Wednesday, when Windsor was a guest at the White House state dinner honoring French President Francois Hollande, who guided his nation to marriage equality last May.