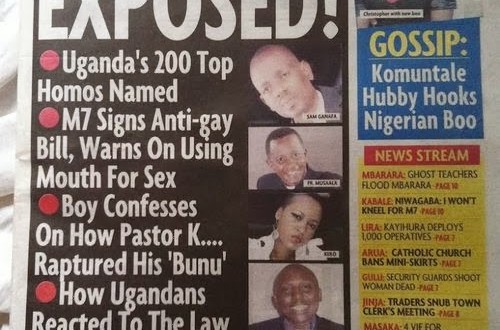 A Ugandan tabloid has published the names of 200 allegedly gay citizens, putting all of these people at the risk of being murdered. Which has happened before. Via the Associated Press:

The Red Pepper tabloid published the names — and some pictures — of alleged homosexuals in a front-page story under the headline: “EXPOSED!” The list included prominent Ugandan gay activists such as Pepe Julian Onziema, who has repeatedly warned that Uganda’s new anti-gay law could spark violence against homosexuals. A popular Ugandan hip-hop star as well as a Catholic priest are also on the list. Few Ugandans identify themselves publicly as gay, and the tabloid’s publication of alleged homosexuals recalled a similar list published in 2011 by a now-defunct tabloid that called for the execution of gays. A Ugandan judge later condemned the outing of homosexuals in a country where gays face severe discrimination, saying it amounted to an invasion of privacy. A prominent Ugandan gay activist, David Kato, was killed after that list came out, and activists said at the time that they believed he was targeted because of his work promoting gay rights in Uganda. “The media witch hunt is back,” tweeted Jacqueline Kasha, a well-known Ugandan lesbian activist who is among those listed in the Red Pepper story.

As noted above, the last time a Ugandan paper did this, it was ordered to pay damages of 1.5M Ugandan shillings (about $650) to the people named and the paper went out of business. But that was before the Anti-Homosexuality Bill was signed into law. Read my coverage of the murder of Ugandan activist David Kato.

Previous 83 Companies: Veto The AZ Hate Bill
Next This Is An Ad For Something