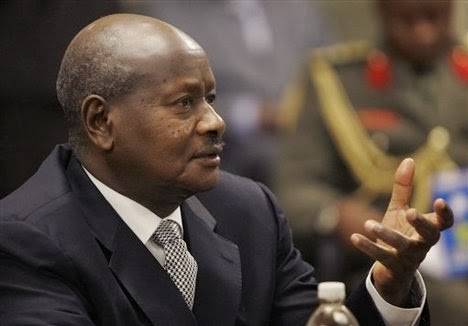 UGANDA: President To Sign Bill That Sentences Gays To Life In Prison

Ugandan President Yoweri Museveni says that he will sign the bill that calls for up to a life sentence for those convicted of homosexuality. Via Buzzfeed:

This is a reversal for Museveni, who had written to members of parliament after the legislation passed in December that he had come to believe that homosexuality was a biological “abnormality” and not something that should be criminalized. He had also told Western human rights activists that he would reject the bill during a meeting last month. Museveni made his announcement during a retreat with members of his party, the National Resistance Movement, which has primarily focused on the party’s leadership as it prepares for elections in 2016. Museveni had been facing stiff pressure from his colleagues to accept the bill.

According to Museveni, he only decided to sign the bill after scientists convinced him that homosexuality “is not genetic.” For several years, Uganda’s so-called “Kill The Gays” bill has been pending. Today’s action presumably means the death penalty is finally off the table.

RELATED:  Museveni has been in office for 28 years and the vote results of his 2011 reelection were contested by the European Union.

UPDATE: The Center For Constitutional Right, which is suing Scott Lively for crimes against humanity on behalf of Ugandan activists, has issued a response.

President Museveni has said he will sign the Anti-Homosexuality Bill and, in so doing, place the lives of countless Ugandans at risk. This dangerous legislation had already intensified the climate of hatred and persecution of the LGBTI community in Uganda. LGBTI Ugandans will become second-class citizens and even more vulnerable to violence and abuse. Right wing U.S. evangelical Scott Lively played a major role in the creation of the bill, and we will continue to hold him accountable in U.S. courts on behalf of our clients, Sexual Minorities Uganda (SMUG). The international community has a legal and moral obligation to prevent this law from being implemented.

Previous Just Because
Next Liberty Counsel Has The Virginia Sadz