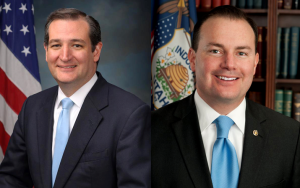 Sen. Ted Cruz (R-Teabagistan) and Sen. Mike Lee (R-Teabagistan) today jointly introduced a bill that limits the federal government to only recognizing same-sex marriages that are conducted legally in the state where the married couple resides. Last month a similar House bill, written by the Family Research Council, was introduced by Rep. Randy Weber. From Cruz’s website:

“I support traditional marriage. Under President Obama, the federal government has tried to re-define marriage, and to undermine the constitutional authority of each state to define marriage consistent with the values of its citizens,” said Sen. Cruz. “The Obama Administration should not be trying to force gay marriage on all 50 states. We should respect the states, and the definition of marriage should be left to democratically elected legislatures, not dictated from Washington. This bill will safeguard the ability of states to preserve traditional marriage for its residents.”

Weber’s bill now has 57 House cosponsors – all Republicans except retiring Rep. Mike McIntrye of North Carolina. The text of the Cruz-Lee bill and any cosponsors have not yet been posted to the official Senate legislation website. We presume it was also written by the FRC as the post on Cruz’ website went up at the same moment as this post by Tony Perkins.