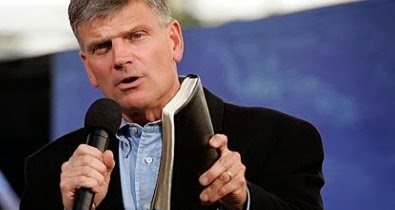 “This is a full-scale assault against Christianity and the followers of Christ. When prayer is banned from the public square, when our President fails to defend biblically defined marriage, and he openly and zealously advocates for gay rights; when legislators rush to overrule existing laws to promote gay marriage; when schools and courts consistently suppress religious freedoms; we know we are locked in a war against the Christian faith, not culture. The architect behind this offensive is none other than Satan himself. The Scripture says that the devil, our archenemy, is bent on as much destruction as possible. Satan knows that one day very soon, he will be cast into the lake of fire and sulfur in hell (Revelation 20:10). As that day draws near, his malicious, hellish activity is intensifying.” – Franklin Graham, writing on his daddy’s website. (Via Good As You)