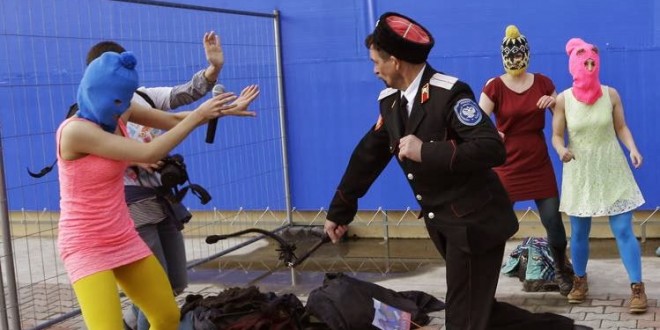 Russian Cossacks used whips and pepper spray Wednesday to attack members of Pussy Riot, the protest punk band opposed to President Vladimir Putin, a filmmaker traveling with the band said. The filmmaker, Simon Ostrovsky, said on Twitter that members of the band were putting on their trademark colorful balaclavas, getting ready to do a song in downtown Sochi, when they were jumped. The Associated Press reported that police arrived and questioned witnesses but made no arrests. One male member of the band was left bloodied after the attack by the Cossacks, militia sometimes used by Russian authorities to patrol streets, the AP said. On Tuesday, police in Sochi detained two members of Pussy Riot for several hours to question them about a theft at their hotel. They were released and left a police station singing and raising their fists.

Russians and ugly Americans are cheering the attack at the below YouTube clip.

UPDATE: The original clip by Russia Today has been yanked, doubtlessly at the demand of the government. Here’s the same video from Britain’s Telegraph.