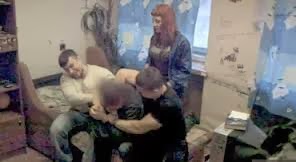 The Russian embassy in London today outrageously condemned Channel 4’s chilling documentary Hunted, saying that the anti-gay violence seen in the film is “slanderous” and is no worse than how Brits treat redheads in their own country. The Telegraph reports:

Russia has attacked a Channel 4 film about attacks on homosexuals in the country, saying a similar documentary could have been made about abuse towards redheads in Britain. ‘Hunted’, a documentary about gangs who abduct and beat gay men and women, is part of a “well-engineered campaign of slander” timed to coincide with the Winter Olympics, Russia’s embassy in London said. The embassy said the Channel 4 film screened last week was “hate propaganda” and “full of distorted facts and unverifiable allegations”. The Russian state does not condone attacks on gay people, diplomats insisted. “The documentary’s emotional appeal is misleading, since the film falls far short of the standards of professional journalistic investigation.

“One could have easily whipped up such ‘documentary’ about a hunting season on redheads in the UK saying that ‘ginger’ people face unmotivated verbal and physical abuse on a daily basis,” it said. “If the authors of the documentary really had evidence of rampant gay hate crimes in Russia, they wouldn’t need to wait until an international sporting event takes place in Russia to raise the alarm. While violent attacks on homosexuals sometimes take place in Russia, just like in many other European countries, this does not mean that they are condoned, supported or, let alone, encouraged by the Government. Such attacks are few and far between and by no means reflect general sentiments of the Russian people.”

The full show was posted unofficially to YouTube last week, but has since been pulled, presumably for copyright violations. Channel 4’s trailer is below.