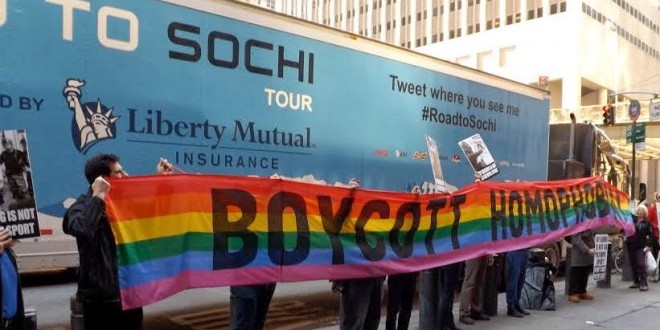 Nearly three dozen members of Queer Nation held a raucous protest at the United States Olympic Committee’s final “Road to Sochi Tour” event at Grand Central Terminal in Manhattan on February 23. The action began just as the event began in historic Vanderbilt Hall, inside the terminal, with protesters chanting “Don’t Buy Putin’s Lies” and unfurling two banners, one reading “Don’t Buy Putin’s Lies” and the other reading “Boycott Homophobia.” Some members also carried signs that read “Gay Bashing Is Not An Olympic Sport.” The banners were hand-sewn by Gilbert Baker, the designer of the original rainbow flag. Queer Nation was then forced out of the terminal by officers in the Metropolitan Transit Authority Police Department. The group briefly protested in front of a Road to Sochi tour truck on East 42nd Street and then marched to the west entrance of Grand Central Terminal, where the protest continued for over an hour. There were no arrests.

Video by ACT UP New York.

Previous Freedom To Marry Launches $1M Campaign For Marriage In The South
Next Real Or Parody Account?