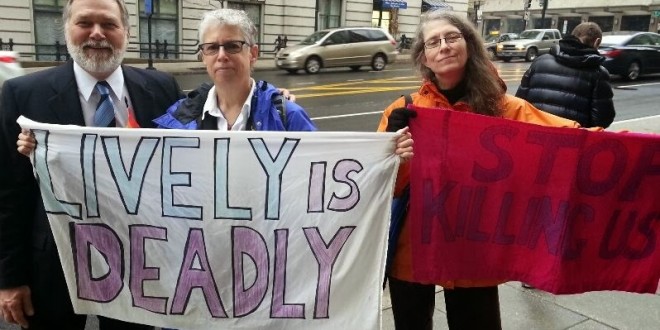 Remember how Scott Lively melted down when activists disrupted his press conference on Friday? Afterwards he smugly posed for a photo with them. He writes:

The conference was briefly disrupted when three LGBT activists (one of them a non-English-speaking Russian) stood up to try to read a statement. We did not allow them to control the room, and asked the National Press Club security to remove them, which they did. Upon realizing that they would not be allowed to stay, the leader of the trio, Ellen Sturtz (self-described as an“Angry Old Lesbian“ on her business card) began screaming “I’m a Homo-Fascist!” and tossed a wad of leaflets in the air. They turned out to be flyers with the title “Lively is Deadly” attempting to convey the message that I am a dangerous person who wants to harm homosexuals around the world. The trio waited on the sidewalk outside the building for an hour and a half waiting for the event to end. I then engaged in a conversation with Ellen for about ten minutes. Amusingly, she asked for a picture with me, and I agreed.