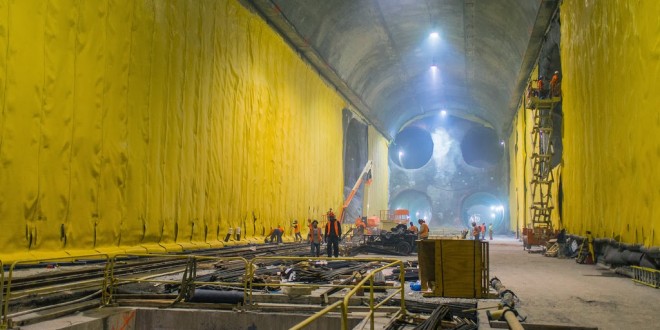 NYC’s East Side Access Project continues apace, and these recent images, taken last month by MTA photographer Rehema Trimiew, show a whole new view of the mind-boggling underground caverns now being constructed beneath Manhattan. From raw walls of exposed geology to this, the space is finally taking on the look and feel of architecture. The titanic yellow facility—its walls secured behind waterproofing geotextiles that will, of course, eventually be covered over altogether, meaning that this surreal yellow scene is just a temporary state—is on the Grand Central side of the project, and will be part of a huge new underground terminal increasing access for the Long Island Railroad.

The tunnel and terminal which will connect Long Island Railroad to Grand Central is one of the two largest public works projects underway in the United States. The other, of course, is the Second Avenue subway on the Upper East Side. The Second Avenue line, which will be called the T train, will run at an average depth of 80 feet below street level. The East Side Access terminal will be a staggering 180 feet below Park Avenue. That’ll be a lot of escalators. 47 escalators, in fact.