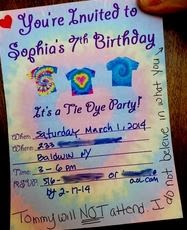 Party Invite Story Was A Hoax

Josh Barro called it – that party invite story that made headlines a few days ago was a hoax pulled by two radio hosts at the Long Island station that first publicized it.

The alleged homophobic note sent by a mother in response to a birthday invite from two gay dads was apparently all just a hoax concocted by a local New York radio station. The note was posted to the station’s Facebook page Wednesday. Readers expressed their disgust and offered support to the same-sex parents. It was shared across the Internet and covered by the media. Now, the entire incident has been revealed as a hoax drummed up by K-98.3’s Steve Harper and his “Morning Show” co-host, Leeana. The two posted an apology note on the station’s website Friday.

Dear K-98.3 Listeners, On Wednesday, we told you the story of Sophia’s birthday party, and one parent’s objection to the same-sex household of Sophia’s parents. We also posted the invitation on our Facebook page, and invited comments from our followers. This story was, in fact, totally fictitious, and created by the two of us. This was done without the knowledge of K-98.3 management or ownership. We were attempting to spur a healthy discourse on a highly passionate topic, but we made a mistake by misleading our listeners into thinking that this specific situation actually existed. We are very sorry that we perpetuated this falsehood, even after it was clear that it had taken on a ‘life of its own.’ We deeply apologize for violating your trust, and we will work hard to regain that trust. Sincerely, Steve & Leeana.

Some are calling for the hosts to be fired.