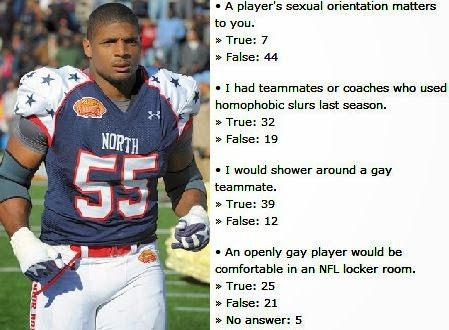 NFL Survey: 86% Of Players Say They Are OK With Openly Gay Teammates

ESPN surveyed 51 active NFL players to ask them the four questions seen above. The NFL has about 1700 active players, so the sample is rather small.

Forty-four players said a teammate’s sexual orientation didn’t matter to them, and 39 said they would be comfortable showering around a gay teammate. But 32 players said they had teammates or coaches who used homophobic slurs last season, and when asked whether an openly gay player would be comfortable in a NFL locker room, just 25 players said yes; 21 said no, while five declined to answer. One concern for players appeared to be learning how they could relate to a teammate they knew was gay and whether they would need to behave any differently around him. According to one starting receiver, “Whoever takes [Michael Sam in the draft] should have an open talk at the beginning of camp, where everybody can ask what he’s comfortable with, what offends him, what boundaries there should be. When it comes to race, people already know the boundaries, to a certain extent. But I don’t think football players are overly familiar with what can and can’t be said around a gay person.”

Right wing sites are focusing on the 25% who say they wouldn’t shower in the presence of a gay teammate. Of course.

Previous Op-Ed Of The Day
Next Tom Daley On Splash!