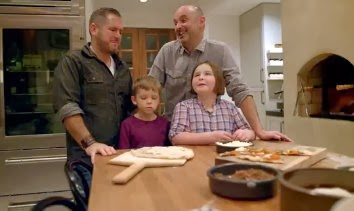 Earlier this week we saw the first gay families included in a Super Bowl ad, and tonight we see the first gay families included in an Olympics Opening Ceremony. “Chevrolet has nailed it with ads that truly reflect the fabric of our nation, which today includes gay and lesbian families,” said GLAAD President and CEO Sarah Kate Ellis. “Recent LGBT-inclusive ads like these not only raise the bar for the advertising industry, but also reflect the growing support and acceptance of LGBT people. It’s about time my children were able to turn on the television and see families like their own represented in mainstream advertising.” This first spot focuses on genuine moments between real families to show, per the ad’s own narration that “while what it means to be a family hasn’t changed, what a family looks like has.” The second sixty-second spot takes a wider look at society through the lens of social media and includes both a gay couple and a nod to gay teen science prodigy, Jack Andraka.

Just fantastic. The sadz will be deafening!