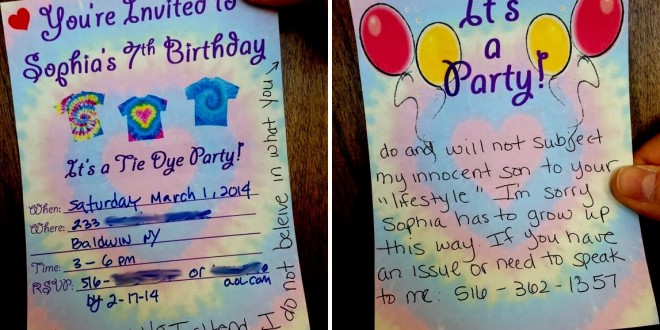 Long Island radio station K98 has posted the above to their Facebook page with this message:

Steve & Leeana [radio hosts] got this from a set of dads in Baldwin who were really upset over how one mom, Beth, chose to respond to their daughter’s birthday party invite. Do you think she was right to write this? Would a simple phone call RSVP’ing “no” been better? BTW: Beth gave us permission to post her phone number and said anyone who has a problem with what she wrote can call her, too!

Commenters at the above link are divided over whether the station should have blurred out the bigot’s phone number even though she apparently welcomes complaining calls.

UPDATE: MSNBC commentator Josh Barro believes that the station is pulling a hoax.

Lots of people sharing this around like it’s confirmed. Have we not learned the Dayna Morales lesson? These notes are hoaxes. In this case, the radio station that ran the note said the nastygram author followed up with them, saying to go ahead and share her number with the public, so they could call if they had a problem with her. The phone number is 516.362.1357. It’s a VoIP line with a voicemail box that sounds like an old-school answering machine. The voicemail box is not full. Also: The party hosts withheld their own names and yet are somehow willing to have their daughter Sophia’s name splashed all over the internet. And their handwriting looks like my mom’s. Have you ever met a gay man with handwriting like that? Fake. Fake. Fake.

Normally I don’t report on these things and I ignored the lesbian waitress hoax that Barro mentions. What do you think? Barro makes some good points. (Except that I do know gay men with handwriting like that.)