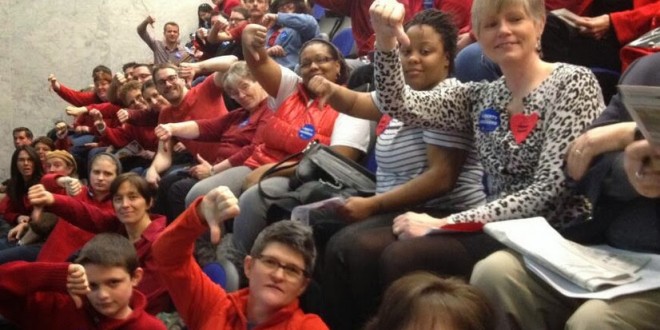 LGBT Hoosiers and allies have packed the gallery at the Indiana Senate. Proceedings are due to commence at 1:30PM local time and can be viewed here.  Today two GOP Senators filed an amendment to reinsert the ban on civil unions.

Two senators — sponsor Dennis Kruse, R-Auburn, and Mike Delph, R-Carmel — have filed proposed changes that would restore the measure’s second sentence, which would ban civil unions and other similar arrangements. That sentence was removed in the House. A survey of senators by The Indianapolis Star shows that it has little to no chance of being restored on the Senate floor, but another maneuver could at least give the second sentence a chance to come back later. Sen. Joe Zakas, R-Granger, has filed a proposed technical change that would simply remove the numeral “(1)” in the portion of the resolution that defines marriage as between “one (1) man and one (1) woman.” That change wouldn’t affect the content of the amendment, but it would create a difference between the House and Senate versions that could give Republican leaders an opportunity to send HJR-3 to conference committee, where the second sentence could be restored later this legislative session.

At this writing, anti-gay hate groups are reportedly singing hymns outside the chamber.

UPDATE II: The bill passed its second of three readings without an amendment.