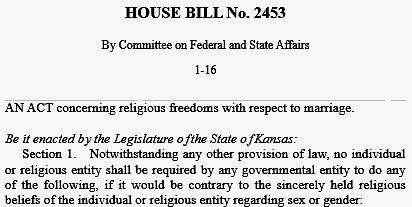 By a vote of 72-49, this afternoon the Kansas House approved a bill which allows businesses to reject LGBT customers on the basis of “sincerely held religious beliefs.”

The bill would bar government sanctions when individuals, groups and businesses cite religious beliefs in refusing to recognize a marriage or civil union, or to provide goods, services, accommodations or employment benefits to a couple. Anti-discrimination lawsuits also would be barred. Individual workers and government employees also would get some protections. The measure is a response to the possibility that the federal courts could invalidate the state constitution’s ban on same-sex marriages.

The bill now goes to the Kansas Senate where Republicans outnumber Democrats by 31-9. Similar bills are in progress in several other states. The full text of the Kansas bill is here.