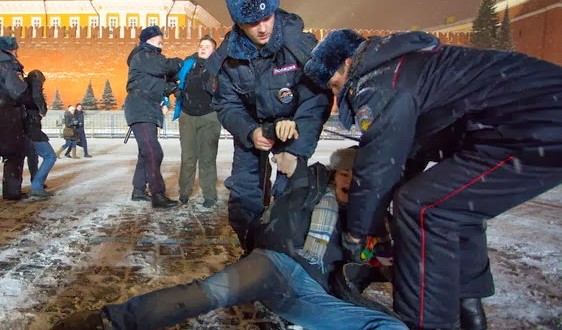 Yesterday dozens of LGBT activists were arrested across Russia for staging pro-gay demonstrations. While in custody, one of the activists arrested in Moscow’s Red Square tweeted that Russian police had beaten them and threatened them with sexual assault. Which the IOC apparently has no problem with.

The International Olympic Committee has said Russia was acting in accordance with its laws when police detained 14 protesters in Moscow and St Petersburg on the day of the Olympic opening ceremonies. Some of those held in Moscow report being beaten while in police custody. “We understand that the protesters were quickly released,” Emmanuelle Moreau, the IOC’s head of media relations, said in an email to BuzzFeed. “As in many countries in the world, in Russia, you need permission before staging a protest. We understand this was the reason that they were temporarily detained.” The speed of the police response in both cases made organizers believe police may have been tapping their phones to monitor their movements. Russian police arrested at least 61 protestors nationwide on Friday — some protesting for causes other than LGBT rights — according to a count by the New York Times.