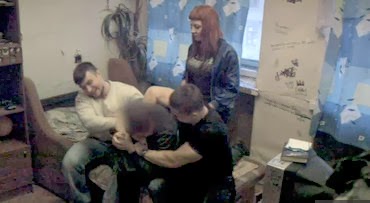 Britain’s Channel 4, which yesterday rebranded itself in protest of Russia’s anti-gay crackdown, has aired a chilling documentary titled Dispatches: Hunted in which journalists travel with gangs of Russian gay bashers to record their vicious actions.

Lucy Mangan reviews the show for the Guardian:

The gangs call it “going on safari”. It is apt, given how comprehensively the church, state, legislature and their own brutal instincts have combined to dehumanise gay men and women. “I just consider them spiritually and morally ill. Even cattle don’t engage in this,” pronounces one representative priest. The terms “paedophile” and “homosexual” are used interchangeably in public and private discourse. Not content with effectively criminalising anything but negative portrayals of, references to or teachings about homosexuality, influential members of the Russian parliament are currently trying to strengthen the new legislation so that the children of gay couples can be taken away from them and put into care. As one gay woman – a mother of three, who did not want to be identified – said, it would be a law to make Hitler proud.

In the meantime, things are horrific. Footage is shown of some of the thousands of attacks that have taken place across Russia since the anti-“gay propaganda” law was passed: a man kicked in the face and falling back unconscious; a man forced naked into a bath being handed a dildo and having a bottle of piss poured over him; and a man with a gun to his head being forced to rape himself with a bottle. The Dispatches team itself is there when the gang they are filming – which seems to be a loose coalition of two groups calling themselves Parents for Russia and Occupy Paedophilia – manages to lure a victim back to a flat. Their taunting (“How do you all become gay? Do you just sit at home and decide to take it up the arse?”) and mental torture (which, on account of the director’s camera does not become physical this time) lasts an hour. “We followed him out,” says the voiceover, “to offer assistance and support.” His suffering, of course, will continue once the film of his “interview”, as the gang calls it, is posted.

The show has been posted in full to YouTube, but not by the network so it will likely be yanked quickly. Watch this right now if you have the time.