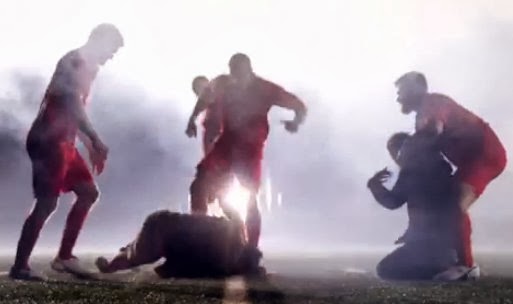 Gay Bashing As An Olympic Sport

The video is the newest fundraising tactic by the Russia Freedom Fund, which aims to raise a million dollars by the end of the Olympics to support LGBT Russian activists. The video was produced by the Fair Games Project, an Indiegogo campaign launched by filmmaker Michael Rohrbaugh. The Fair Games Project also produced a powerful gun violence PSA that received significant attention last year. Athlete Ally is one of the producing partners on the video as well. Other fundraising tactics for the Russia Freedom Fund include a new national initiative called Uprising of Love: Pride House 2014, where restaurants, bars, and clubs will donate $1 of every drink sold from 9 p.m. to midnight to the fund. It takes place during tomorrow’s Opening Ceremonies. In addition, Melissa Etheridge released a new single last week and will donate 100% of the profits to the fund. The significance of the Russia Freedom Fund is that it’s the only way Americans can directly support LGBT Russian activists.