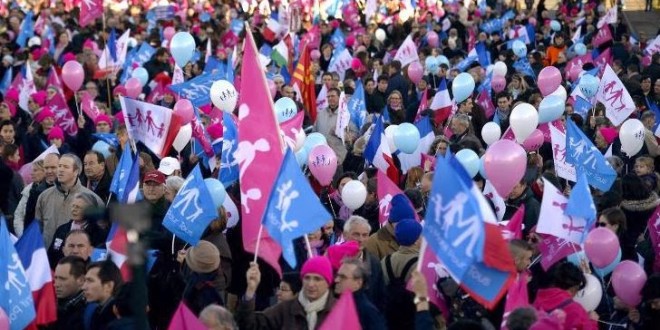 Led by Marion Maréchal-Le Pen, the 24 year-old granddaughter of neo-Nazi National Front founder Jean-Marie Le Pen, who has been convicted multiple times for inciting racial hatred, today Manif Pour Tous yet again staged massive anti-gay rallies in Paris and Lyon, where tens of thousands marched against LGBT families. The granddaughter, seen in the first clip below, is the youngest person ever elected to France’s Parliament. In the second clip, a demonstrator burns a paper bearing the name of French Minister of Justice Christiane Taubira, who became a gay icon for her ardent support of same-sex marriage. France’s gay marriage law is known nationally as “Taubira’s Law.” As the third clip explains, the theme of today’s protest is anger over the right of same-sex couples to use surrogacy to build their families. A member of France’s opposition UMP party is live-tweeting many photos from the event.

RELATED: JMG reader David writes from Paris to tip us to the below poll from Le Parisien, which asks its readers if Manif Pour Tous has any reason for continuing to exist. You know what to do.