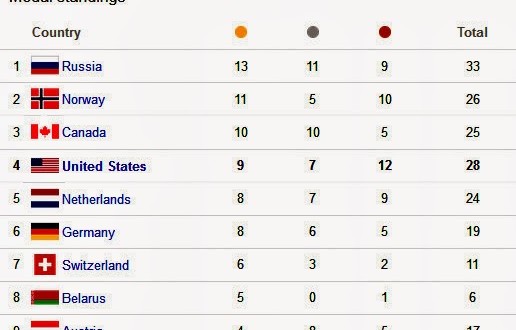 Purists will say the Olympics is really all about individual sporting achievement, but for the national Olympic committees, medal counts do matter. And for Russia, this haul has to be a point of pride — even if the men’s hockey team failed to make it to the medal round. This is the fourth time the host nation of an Olympics has emerged victorious in the medal count, making a strong case for the idea of home field advantage (U.S. in 1932; Norway in 1952 and Canada in 2010). Athletes in Sochi couldn’t help but be motivated by the deafening chants of “Russ-ee-ahhh” in every arena and mountain venue. Team USA ended up with 28 medals (9 gold, 7 silver and 12 bronze), including a bronze secured Sunday by Steve Holcomb and his four-man bobsled team. The team just barely beat out Russia’s second bobsled team by .03 seconds. Holcomb also won bronze earlier in the games in two-man bobsled.