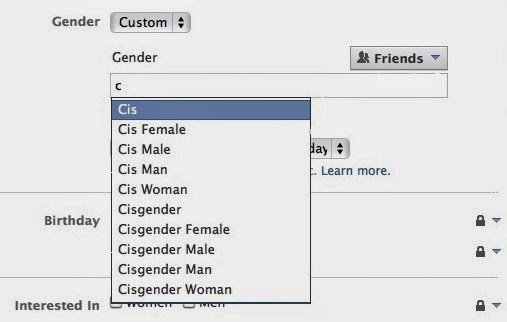 You don’t have to be strictly a man or a woman on Facebook anymore. In a nod to the “it’s complicated” sexual identities of many of its users, the social network on Thursday added a third “custom” gender option for people’s profiles. In addition to Male or Female, Facebook now lets U.S. users choose among some 50 additional options such as “transgender,” “cisgender,” “gender fluid,” “intersex” and “neither.” Users also now have the ability to choose the pronoun they’d like to be referred to publicly: he/his, she/her, or the gender-neutral they/their. “When you come to Facebook to connect with the people, causes, and organizations you care about, we want you to feel comfortable being your true, authentic self,” Facebook said in a post on its Diversity page.

I don’t recommend the comments on the below clip.

Previous AFA: Impeach Eric Holder
Next This Was Inevitable