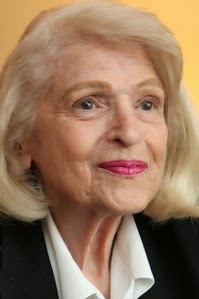 Climbing out of his limousine just after 7 p.m., he [Hollande] was greeted by the Obamas, the first lady in a full liberty-blue skirt and black beaded top by Carolina Herrera. The first couple towered over Mr. Hollande for a photo, before the three made their way inside. The guest list for the state dinner, as is traditional, drew from the worlds of politics, business, sports, news media and entertainment, with a nod to Americans of French extraction. Among the most notable guests was Edith Windsor, 83, the New Yorker whose landmark lawsuit against the federal government for denying her tax benefits after the death of her female spouse knocked down the Defense of Marriage Act last year. Among the news media figures invited were Jeff Zucker, the president of CNN, and Jill Abramson, the executive editor of The New York Times.