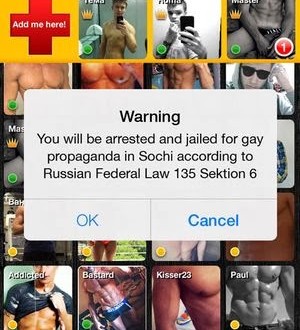 Andy Towle today reports on an email he received from the founder of the gay hook-up app Hunters. An excerpt:

The anonymous threat which read, “You will be arrested and jailed for gay propaganda in Sochi according to Russian Federal Law #135 Sektion 6″ was sent on February 1st, 2014 at 11:52 pm to all users in Russia, including those in Sochi. Hunters is blocked in Sochi and Adler now, and some 72,000 user profiles were deleted throughout Russia. Hackers completely destroyed their profiles and all their messages.” On the morning of February 2nd, just a few days before the opening of the Olympic Games, users trying to open this gay app in Sochi were greeted with an alert saying that their profile was blocked for the next 55,000 minutes (38 days).

The site’s founder says that they are in the process of moving their server out of Russia. (Tipped by JMG reader Ed)