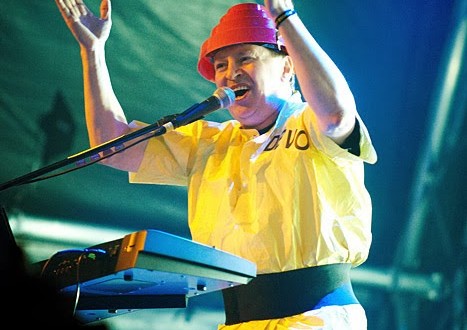 Devo’s Bob “Bob 2” Casale has died of heart failure at the age of 61. Via Billboard Magazine:

The Casale brothers formed Devo in Akron, Ohio in 1972 with Mark Motherbaugh and Robert Mothersbaugh (Bob Casale was known as “Bob 2” in the group, with Robert Mothersbaugh called “Bob 1”). The group’s spastic post-punk earned a cult following in the mid-70’s, and 1978 debut album “Q: Are We Not Men? A: We Are Devo!,” produced by Brian Eno, earned critical acclaim. Devo’s biggest success on the Billboard charts came with its iconic single “Whip It,” which reached No. 14 on the Billboard Hot 100 in 1980. The act charted two more singles: “Working In the Coal Mine” (No. 43 in 1981) and “Theme from ‘Doctor Detroit'” (No. 59 in 1983). The album that contained “Whip It,” 1980’s “Freedom of Choice,” was the group’s highest-charting effort on the Billboard 200. It hit No. 22 and spent 51 weeks on the list, and was certified platinum by the Recording Industry Association of America (for one million copies sold).

I first saw Devo at Orlando’s Great Southern Music Hall in 1980. I think the ticket cost $7. My souvenir from the show was late drummer Alan Myers’ paper jumpsuit, which I stupidly lent to a friend to wear for Halloween and never got back.