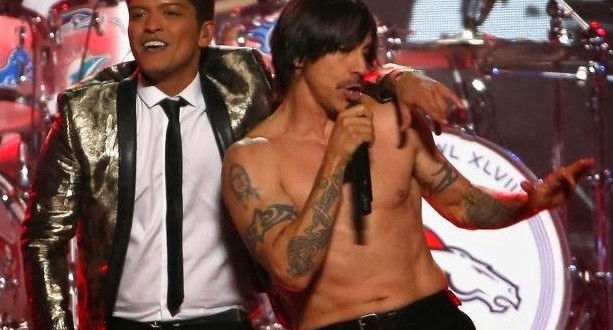 Despite the best attempts of the NFL and Pepsi to sell Mars as a pop idol worthy of shrieking girls and an audience of 110 million people, the Super Bowl XLVIII halftime show was a wholly unspectacular production that will join Tom Petty and The Who in the annals of instantly-forgettable halftime entertainment. Perhaps the game’s 22-0 halftime margin had sucked much of the energy out of the sold out MetLife Stadium crowd or maybe the loudest members just hadn’t returned from their journeys to the restroom and concession stands, but Mars’ performance didn’t seem to have impact of previous performers in that spot. Until the appearance by the always-game Red Hot Chili Peppers, the show felt like a snooze. It belonged at the People’s Choice Awards, not on the Super Bowl stage. It’s not great when a band in their 50s has to perform a 23-year-old song to inject energy into the biggest 15 minutes of the music year.

The New York Daily News was much kinder:

He may not have the figure of Beyoncé or the buzz of Madonna. But this year’s half time star — Bruno Mars — brought dynamism and an old-fashioned sense of showmanship to his Super Bowl blow-out. Opening with his smash “Locked Out of Heaven,” the pompadour’d star whipped through a tight and brisk run of four hits. His sole guest stars — The Red Hot Chili Peppers — seamlessly slipped their percussive song “Give It Away” into the headliner’s “Runaway Baby.” Mars’ 12-minute display exuded a friendliness and ease so winning, it made the edginess or cool of some past Super Bowl stars irrelevant. More, the performance wore its sources well, doubling as a history lesson in song. The songs Mars offered represented a virtual pop nexus of the last 40 years, touching on bouncy ’60s Motown, fun ’70s disco funk, slick ’80s pop and a hint of modern hip-hop-flash. At one point, he referenced James Brown’s fast-footed dance moves.

Nothing, of course, could top Madonna’s 2012 Super Bowl entrance on a chariot being pulled by a hundred beefy Roman gladiators.