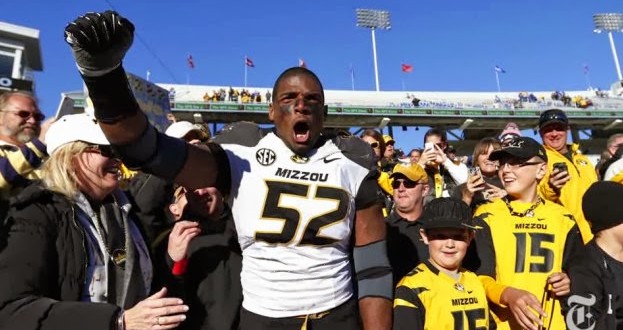 Coaches at the University of Missouri divided players into small groups at a preseason football practice last year for a team-building exercise. One by one, players were asked to talk about themselves — where they grew up, why they chose Missouri and what others might not know about them. As Michael Sam, a defensive lineman, began to speak, he balled up a piece of paper in his hands. “I’m gay,” he said. With that, Mr. Sam set himself on a path to become the first publicly gay player in the National Football League. “I looked in their eyes, and they just started shaking their heads — like, finally, he came out,” Mr. Sam said Sunday in an interview with The New York Times, the first time he spoke publicly about his sexual orientation.

Sam has been forecast to be drafted in the early rounds and says he came out now because he knew rumors were circulating. Some of his teammates knew he had been dating a member of the Missouri swim team.

I want to thank everybody for their support and encouragement,especially @espn, @nytimes and @nfl. I am proud to tell my story to the world!
— Michael Sam (@MikeSamFootball) February 10, 2014

UPDATE: Outsports has a behind-the-scenes look at Sam’s coming out.

UPDATE II: More of the back story.

Sam was a defensive end for Mizzou Tigers of the University of Missouri. He graduated in December and is currently a highly-touted prospect in the National Football League (NFL) draft. He becomes the first publicly gay athlete in any of the Big 4 sports drafts. In interviews with The New York Times and ESPN tonight, the football player stated: “I am an openly, proud gay man.” In December 2013, The Associated Press named him the SEC’s Defensive Player of the Year. He was also selected as one of ten unanimous first-team all-Americans. He led the SEC in both sacks and tackles-for-loss and resides in the top 10 nationally in Division I in those categories.

He is originally from Hitchcock, Texas. Sports journalist Cyd Zeigler stated to GLAAD: “Every NFL draft expert has Sam being selected in the first to fifth round of this year’s NFL draft.” Before his announcement, Michael Sam’s publicist Howard Bragman introduced to him to athletes including openly gay former NFL players Dave Kopay and Wade Davis Jr., openly gay NBA player Jason Collins, openly gay former Major League Baseball player Billy Bean, as well as outspoken straight allies and former NFL players Brendan Ayanbadejo and Chris Kluwe. This is the fifth professional athlete that Bragman has taken out of the closet, along with more than a dozen celebrities.

“Michael has shown great courage in taking this step and not only do we support him, we are incredibly grateful. His decision to welcome us all into his world as he embarks upon a professional NFL career is an honorable one. This moment will resonate in a unique and important way for countless people, particularly LGBT youth,” said Super Bowl champion and human rights activist Brendon Ayanbadejo, who is a member of the Athlete Ally Board of Directors. Hudson Taylor, Founder and Executive Director of Athlete Ally said: “With Michael Sam’s brave step, he emboldens LGBT athletes and straight allies everywhere. We are in the midst of incredible transformation in American professional sports. In a very short period of time, athletics has gone from being known as ‘the last closet in America’ to being in a position to lead on this issue. This is the power of sports.”

UPDATE IV: The NFL has issued a statement: “We admire Michael Sam’s honesty and courage. Michael is a football player. Any player with ability and determination can succeed in the NFL. We look forward to welcoming and supporting Michael Sam in 2014.”