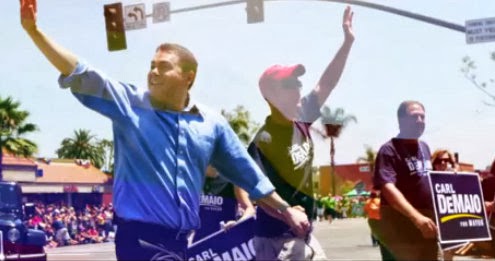 Brian Brown has written a curiously homoerotic denouncement of the US House candidacy of San Diego homocon Carl DeMaio. It begins:

Dear Marriage Supporter, It’s a beautiful summer day in southern California. Throngs of people line streets as paraders march by. They include transvestite brides (men in wedding gowns) who strut their stuff. Nearby a float with bare-chested, heavily muscled men in tight underwear that leaves nothing to the imagination hold hands and dance on a rolling stage as rainbow flags fly behind them. Not far away women kiss other women and tattooed men embrace, pulling their half-naked bodies tight to each other. A confused-looking child watches this scene unfold as she holds a ‘we celebrate diversity’ sign, not exactly the type of plaything we’d expect innocent youngster to cling to. In their midst the candidate walks down the street holding the hand of his gay lover. He waves at the crowd and smiles approvingly. These are his people, and he is at home. Who is he? He’s Carl DeMaio. A homosexual activist who calls himself a Republican. And he wants to be a Member of Congress.

Few in San Diego would characterize DeMaio as a “homosexual activist” as he’s had the backing of major Prop 8 supporters, is anti-union, and has declared that LGBT rights will never affect his political decisions. Brown goes on to endorse another GOP candidate, Kirk Jorgensen, a former Marine and local rancher. I’m sure you’ll be shocked to learn that Jorgensen is a Catholic – as are Brown and pretty much everybody else at NOM.