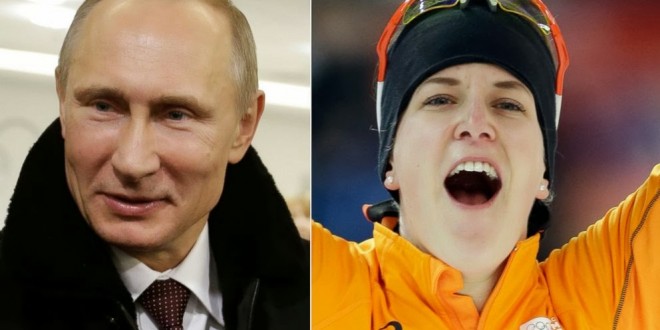 Openly bisexual Dutch speedskater Ireen Wust told reporters that she had a “cuddle” with Vladimir Putin after winning her gold medal on Sunday.

Wust told Dutch national broadcaster NOS, “I got a cuddle from him,” at a party held in her honor. “He congratulated me and asked if everything was OK in Russia and I congratulated him on (Russian speedskater) Olga Graf, of course, for her third place (in the 3,000 meters). He was happy to see me, but then he had to leave again. But I cuddled him.” John van Vliet, a spokesman for the Netherlands’ Olympics Committee, said Putin gave Wust a quick hug and wished her well. Wust, who took gold at the 3,000 meter women’s speedskate on Sunday, is one of seven openly gay athletes competing at the games.

“The Olympic athletes have said that they will not make political statements during the Games yet that is exactly what Ireen Wust did,” said Duncan Osborne, a member of Queer Nation. “By embracing Vladimir Putin, a man who has trampled on the human rights of LGBT Russians, political dissidents, artists, undocumented immigrants, and others in Russia, Wust has endorsed his fascist agenda.” “LGBT Russians and political dissidents are showing us what courage and commitment look like,” said Osborne. “Embracing Vladimir Putin is a betrayal of that courage and commitment. Wust should be ashamed of herself. Every athlete in Sochi should understand that the whole world is watching. We cannot make the athletes show the sort of courage that LGBT Russians display, but we will not be silent and we will not forget if the athletes embrace Putin.”