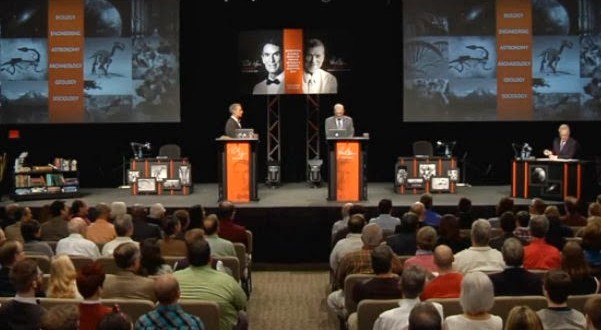 Bill Nye The Science Guy tonight debated Creation Museum head Ken Ham in an event that has been posted in full to YouTube.

“I just want to remind us all there are billions of people in the world who are deeply religious, who get enriched by the wonderful sense of community by their religion,” said Nye, who wore his trademark bow tie. “But these same people do not embrace the extraordinary view that the Earth is somehow only 6,000 years old.” Nye said technology keeps the U.S. ahead as a world leader and he worried that if creationism is taught to children the country would fall behind. “If we continue to eschew science … we are not going to move forward,” Nye said. “We will not embrace natural laws. We will not make discoveries. We will not invent and innovate and stay ahead.” Ham showed the theater audience of about 800 people — and those watching the debate live on the Internet — slides backing up his assertions. “Creation is the only viable model of historical science confirmed by observational science in today’s modern scientific era,” Ham said. He also introduced scientists who he said were also creationists. “I believe the word ‘science’ has been hijacked by secularists,” Ham said

Some of Nye’s biggest supporters have tweeted their disappointment with his performance. Watch and give us your own reviews.