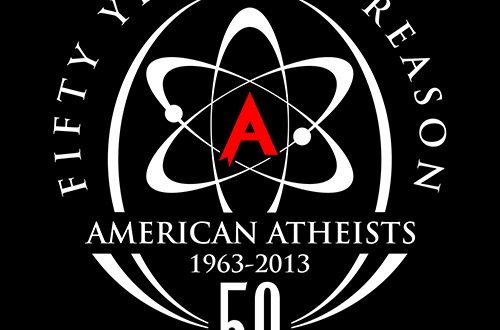 American Atheists will have a booth at next month’s CPAC.

The atheist institution, which is well known for its controversial billboards and media campaigns, informed CNN of its inclusion on Monday night, and a representative from CPAC confirmed that the group will have a booth at March’s national annual gathering of conservative leaders and activists. American Atheists hopes to use the forum to tap into the conservative movement and bring conservative atheists “out of the closet.” “Just as there are many closeted atheists in the church pews, I am extremely confident that there are many closeted atheists in the ranks of conservatives,” said David Silverman, president of American Atheists. American Atheists paid $3,000 for booth 439 in the event’s exhibition hall. Their booth will be right next to the Republican National Committee, according to the room map.

Tony Perkins is livid, you guys!

“CPAC’s mission is to be an umbrella for conservative organizations that advance liberty, traditional values and our national defense,” said Perkins, who spoke at CPAC in 2012. “Does the American Conservative Union really think the liberties and values they seek to preserve can be maintained when they partner with individuals and organizations that are undermining the understanding that our liberties come from God? Thomas Jefferson warned against such nonsense.” The social conservative leader added: “If this is where the ACU is headed, they will have to pack up and put away the ‘C’ in CPAC!”

First GOProud and now atheists! The world has gone maaaaad! Mad, I tells ya!

Previous This Is An Ad For Something
Next NFL: We Are Watching Arizona