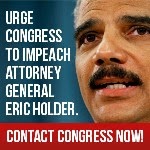 “United States Attorney General Eric Holder, this week, has again overstepped the boundaries of the law when he arbitrarily ordered that homosexual couples will now receive government benefits reserved only for natural marriage status. This applies even in states that have laws defining marriage as only between one man and one woman. Taking a nod from the playbook of his boss, President Barack Obama, Holder wielded his own pen and paper, trampling on states’ rights and disenfranchising voters in states defining marriage as only between one man and one woman. TAKE ACTION! Urge your representative to press for the impeachment of Attorney General Eric Holder for high crimes and misdemeanors.” – From an email sent today by the American Family Association to its supporters. The impeachment bill they cite was introduced over two years ago and still only has 24 House cosponsors. Even Rep. Randy Weber’s laughably doomed bill has twice that many in less than a month.