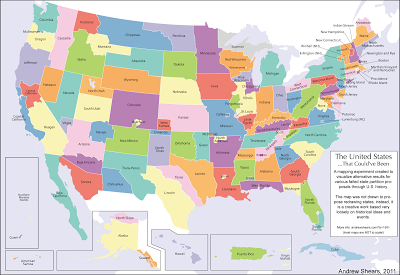 The 124 States Of America

Secessionist movements are all the rage these days. A handful of counties in Colorado tried to secede from the rest of the state earlier this year. There’s an attempt to create the State of Jefferson (northern California/southern Oregon) via ballot initiative in 2014. And there’s plenty more. What would the U.S. look like if all of the secession movements in U.S. history had succeeded? Well, Mansfield University geography professor Andrew Shears built a map to answer that question. (It covers secession movements through the end of 2011.)