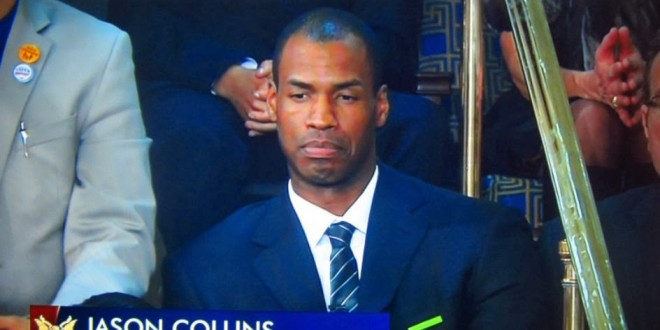 State Of The Union: Open Thread

President Obama’s State Of The Union address begins at 9pm Eastern. Watch live here and give us your reactions.

UPDATE: The address has concluded. Jason Collins appeared onscreen seconds before the president delivered these lines: “We do these things because they help promote our long-term security. And we do them because we believe in the inherent dignity and equality of every human being, regardless of race or religion, creed or sexual orientation. And next week, the world will see one expression of that commitment – when Team USA marches the red, white, and blue into the Olympic Stadium – and brings home the gold.” That was some good directing.

The only other mention of a gay-related issue came early in the address: “Across the country, we’re partnering with mayors, governors, and state legislatures on issues from homelessness to marriage equality.” Despite the hopes of some activists, there was no mention of ENDA or of a related executive order regarding companies that do business with the federal government. The fact sheet sent by the White House during the speech contained this paragraph under the heading “Continuing To Work With Congress”:

Workplace Equality for LGBT Workers. Today, federal law prohibits employment discrimination based on race, sex, religion, and disability. It’s time to add sexual orientation and gender identity to that list, so that no American worker can lose his or her job simply because of who they are or who they love. The Employment Non-Discrimination Act would provide strong federal protections for lesbian, gay, bisexual, and transgender workers. Last year, a bipartisan majority of the Senate passed ENDA, and the President renews his call for the House to do the same.

UPDATE: The Human Rights Campaign didn’t like absence of an ENDA mention.

“The President’s message tonight failed to address the needs of LGBT workers looking for a fair shake in this economy. Not only was there no call for the House to pass a federal law to protect LGBT workers nationwide, President Obama also sidestepped his commitment to take action where Congress has left off, leaving out an order prohibiting discrimination by federal contractors. Unfortunately, President Obama missed a real opportunity to use the State of the Union to improve the lives of LGBT people by taking immediate executive action to address anti-LGBT discrimination for the millions of Americans employed by federal contractors. No federal contractor like ExxonMobil should be able to take billions in taxpayer dollars without safeguards in place to prevent discrimination. The President promised this action in 2007 and we will continue to work with him and Congress to ensure that all Americans can contribute to the economy without fear of anti-LGBT discrimination.”

UPDATE II: And here is the reaction from the Task Force.

“The President is right to urge congress to fix our broken immigration system this year, the creation of more jobs, equal pay for women, and the restoration of the Voting Rights Act. We are also pleased that the President is using his pen like he said he would to move things forward: in this instance by signing an executive order to increase the minimum wage for federal contract workers. However, he must go further and sign an executive order that bans discrimination against the same contract workers who are LGBT. The irony is that some LGBT federal contract workers will get a pay raise but they could still be fired for who they are and who they love. The longer the President waits the more damage LGBT people will face; discrimination is a painful reality that is too often the lived experience of LGBT people. The President has to act when Congress won’t.”

Previous Pastor Busted For Impersonating Cop During Hook-Up Robbery Of Gay Man
Next GOP Rep. Michael Grimm (NY) Threatens Reporter: I Could Break You In Half