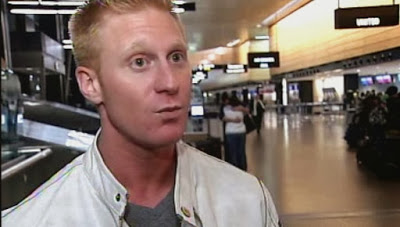 In the first few seconds after the fire roared up the back stairway of Neighbours nightclub in Seattle, US Army Staff Sgt. Christopher Bostick [ABOVE] was one of a few New Year’s Eve revelers who reacted immediately. “I’m embarrassed to say, my first move was to go after it with cups of water. Then I quickly realized, this fire is way bigger than that,” he said. In the next breath, the Army Intelligence veteran of Iraq and Afghanistan tours sharpens his tone, as if news of impending violence is to follow. “You know, in 30 seconds, if that fire did what the arsonist intended, there’s no telling how many people could have died.”

While 750 people counted down to the new year, Bostick rushed to grab a fire extinguisher from behind the bar. He and Air Force member Mike Casey went to work putting out the gasoline-fueled fire. “It was like the Carrie movie,” Bostick recounted, “you see just fire everywhere. And that’s all you can see and for a second, that’s all you’re focused on.” Bostick and Casey tamed flames filling the staircase, after an arsonist poured gasoline on the carpeted stairway from a plastic liter gas can, dropped the can on the top step, and lit it ablaze from the bottom. “If we hadn’t reacted to it, it would have taken too long for someone to react, and that fire would have become unmanageable in another 30 seconds,’’ Bostick said.

Fittingly, Bostick is a terrorism specialist. My earlier reports on the incident are here and here.

Previous Linda Harvey: I Pulled My Book From Amazon Myself Because Of Gay Bloggers
Next Bob Barker Slams Obamacare