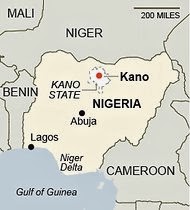 NIGERIA: Islamic Enforcers Vow To Hunt Down Gays “In Every Nook And Corner”

Emboldened by Monday’s passage of a bill that super-criminalized homosexuality, Sharia enforcers in Nigeria’s largest northern city of Kano (population 2.8M) have vowed to hunt down gay people.

The Hisbah has in recent months cracked down on prostitution and drug addiction in the majority Muslim city and pledged to do the same against homosexuality. “Obviously, we will embark on similar raids on gays and lesbians in Kano,” he added, vowing to work “hand in hand” with security agencies to enforce the national legislation. “From now on, we will go into every nook and corner of Kano state to ensure that (the prohibition of) prostitution, gay marriages, marriages of the same sex and consumption of alcohol… is fully complied with, so that we can have a decent society.

“We are given more power, we are given more support now to wage serious war against these issues.” The Bauchi state Sharia Commission chief Mustapha Baba Ilela meanwhile said at least 12 people had been arrested on suspicion of breaking Sharia laws banning sodomy since the start of the year. “All the accused were apprehended by the community, which is averse to homosexuality, and handed over to us,” he added. “The suspects confessed to committing the act they are accused of without threat or inducement and we have the audio and written confessions.”

Dorothy Aken’ova, the executive director of the International Centre for Reproductive Health and Sexual Rights, added that the police in Bauchi had more than 160 names on a list and were planning arrests. Since the law was signed, she said 24 people had been arrested in three southern states — 12 in Ibadan, Oyo; six in Owerri, Imo; and six in Awka, the capital of Anambra. Most of the people arrested had previously been detained but had been re-arrested since the new law was announced, she added.

Homosexual acts have long been illegal in Nigeria, but Monday’s bill also made it a crime punishable by ten years in prison to form gay clubs, promote LGBT rights, or stage same-sex ceremonies. In the northern parts of Nigeria, where Islamic law “runs parallel” to state laws, the Sharia punishment for homosexual acts is death by stoning, although there have been no confirmed reports of such executions. It is feared that may now change.