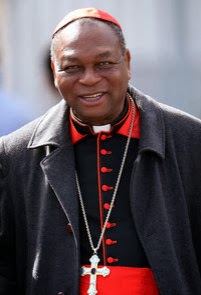 “The church accepts people as they are, we condemn homosexuality, Nigeria is an independent country and we do not beg for food. We have every right to order our social life in any way we think it should go. Our social life should not be organised on the basis of what others think. On this note, I commend our National Assembly and Mr President for resisting all the pressures and enacting a law against homosexuality. Signing the bill into law by President Jonathan in spite of pressures from within and outside the country should be commended by all and sundry. The world is at crossroads and there is nothing new under the sun. `We all know that this is not the first time we have heard about the agitation for gay rights but our position, as a church, has not changed. Even when some sections of society view same sex issues as moral disorder acts, homosexuality has not stopped, it still happens in the open around the world. It doesn’t mean that it should be accepted.” – Cardinal John Onaiyekan, speaking to Nigeria’s PM News. Onaiyekan got his red hat from Pope Benedict in 2012.  Last July Pope Francis named him the Vatican’s Apostolic Administrator (rule enforcer) for the Diocese of Ahaira in southern Nigeria. (Via Bilerico)