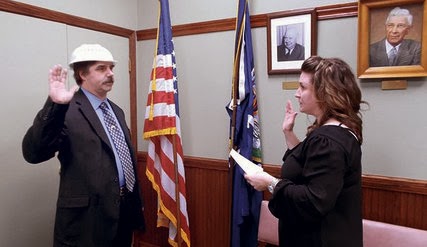 From the Dunkirk Observer:

A unique style of headwear was present during newly-seated Pomfret Town Council member Christopher Schaeffer’s oath of office Thursday afternoon, but it wasn’t intended to keep his head warm. Schaeffer wore a colander (a strainer typically used to drain water from spaghetti) while Town Clerk Allison Dispense administered the oath of office to him before the board’s reorganizational meeting. When the OBSERVER asked afterward why he wore a colander on his head, Schaeffer said he was a minister with an even more unique organization – the Church of the Flying Spaghetti Monster. “It’s just a statement about religious freedom,” he said. “It’s a religion without any dogma.”