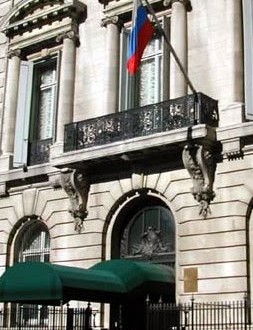 Members of the gay activist group Queer Nation and others who oppose the Russian government’s continued attacks on human rights, including the rights of LGBT Russians, will mark the start of the 2014 Winter Olympic Games with a protest outside the Russian consulate in New York City at noon on February 6. “Gay bashing is not an Olympic sport,” said Scott Wooledge, a member of Queer Nation. “The International Olympic Committee, the Olympic sponsors, including Coke, P&G, and McDonald’s, and the athletes who are competing in Russia have refused to support human rights — so we will. The Russian government is on notice that the start of the Olympics is not the end of this fight.” “Vladimir Putin,” Russia’s president, will appear at the protest outside the Russian consulate at 9 E. 91st in Manhattan, where he is expected to desecrate an Olympic flag.

Previous Reince Preibus: Despite Apology, MSNBC Remains On Probation With The GOP
Next Fox News: Most & Least Trusted Network