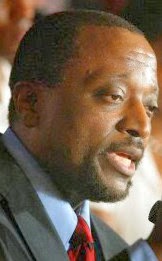 Jesus Wants Obama To Be Impeached

“Many Americans are still adamantly unwilling to choke down the prospect of life under a vicious, dictatorial regime. Their eyes see past the populist disguise of socialist gangsterism. Some have (I think prematurely) concluded that America’s liberty is irretrievable defunct. But even they have by no means surrendered their allegiance to it. Others, particularly those who believe in Jesus Christ’s permanent resurrection of hope, look unflinchingly into the abyss, sure that if they remember and trust in God’s law of love and mercy, He has the power to restore their nation to the better path of human destiny. It is especially (though not exclusively) among such people that the movement to impeach and remove Obama and his cronies from office arises.” – Three times failed presidential candidate Alan Keyes, writing for World Net Daily.